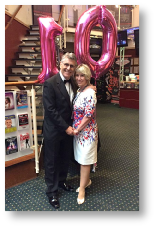 Lucie Benson School Of Dance prides itself on being a family orientated dance school. On a Saturday in Putney, you will be greeted with a lovely smile by Jackie at the front desk who will make sure your child is very well looked after.

You will find Ian with an equally lovely smile serving in our famous Tuck shop and always ready to talk about his favourite football team, Spurs!

Ian & Jackie are both DBS Checked and registered Chaperones. 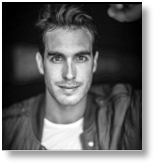 Chris trained at Tiffany Theatre College studying, Dance, Drama and Musical Theatre. Chris has worked successfully in the industry for over a decade, still to this day working as a commercial actor and model,. Chris has fronted numerous World Wide campaigns for the industries biggest names. Jaguar, HTC, Samsung, Diesel Jeans, GQ magazine, Tom Tom, Hershey’s, Ribena and Hungry house. Chris is a fully qualified Personal Trainer and Tennis coach. He teaches all aspects of Fitness including Pilates, Yoga, Body Conditioning and Kick Boxing. Chris is an Acrobatics Arts coach and joined the LB team in 2017 to teach the Acro classes, which have proven to be hugely popular!

Bec graduated from the Royal College of Music in London where she studied with Lilian Watson. She began singing in the world-renowned Cantamus Girls’ Choir under the tutelage of Pamela Cook MBE aged 13 and became one of the choir’s principal soloists, travelling to Japan, Spain, Italy, Belgium, Czech Republic and Japan as well as winning BBC Choir of the Year and Choir of the World at the Llangollen Eisteddfod.

Stage performances include L’Egisto, The Marriage of Figaro, Don Giovanni and Sweeny Todd in the Britten Theatre. She has performed lead roles at the International Gilbert and Sullivan Opera Festival at Buxton Opera House with the professional G&S Opera Company in The Yeomen of the Guard, Patience, Gondoliers, Iolanthe, Ruddigore, HMS Pinafore, The Pirates of Penzance, The Sorcerer and The Mikado.

As a soloist, Bec has performed in concerts and oratorio extensively throughout the UK and regularly works as a session singer for TV and film.

Bec is Head of Music at the Unicorn School, Kew; is Musical Director of four award-winning choirs in Surrey and is much in demand as an adjudicator.

Bec is DBS checked and a licensed Child Chaperone.

Zoe started dancing at age 3 at local ballet classes in Twickenham. After completing her A-Levels she went on to train professionally in all dance styles plus singing and acting at London Studio Centre. A career dancing around the world on cruise ships, in casino and circus shows followed.

Later in her career she decided that she would like to try to pass on her dance and performing skills by embarking on the ‘Certificate in Ballet Teaching Studies’ with the Royal Academy of Dance, the syllabus she followed as a child.

Since graduating from the Royal Academy of Dance in 2014, Zoe has taught all levels of Ballet from ages 2 up to Adult across London for various dance schools.  She mainly teaches RAD syllabus ballet and coaches for exams. She has also taught Tap, Modern and Jazz. Zoe is DBS checked.